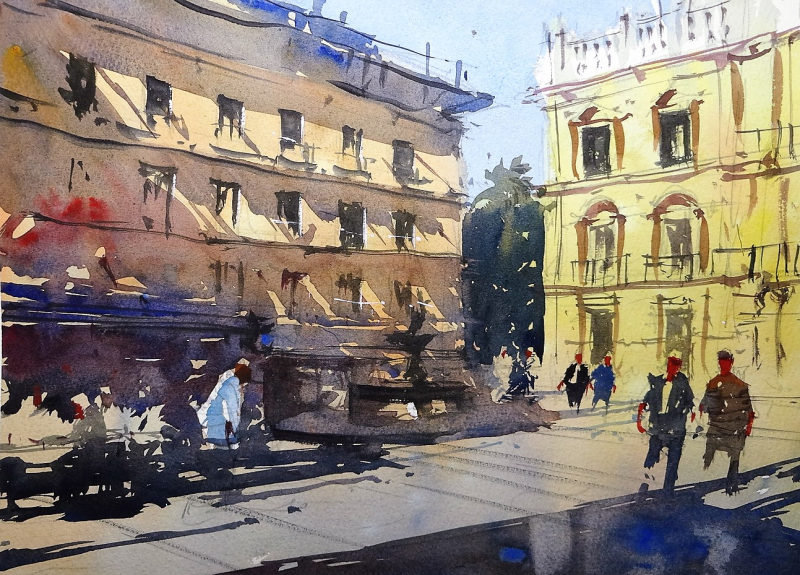 The lovely yellow/warm facade of Palacio Episcopal in central Malaga.  Great subject for a watercolour - lovely colours and contrasts with the angle of the sun coming through the square.  One of those places you could spend all day in and just paint different views as the sun moves around.  As you can see on the left, I greatly simplified the people in the cafe - just silhouettes really and shadows on the ground of the table legs and chairs. 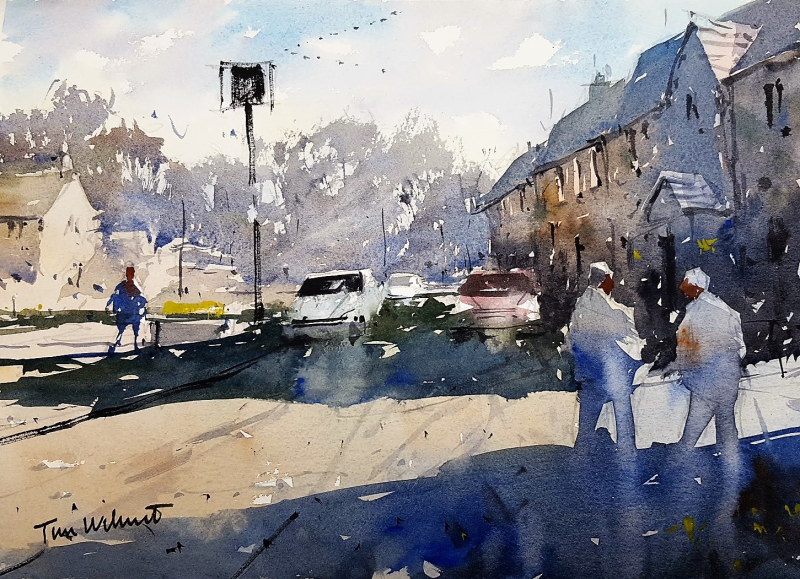 Wednesday night sketch night at the Bristol Savages and subject for the evening - "Rustle of Spring".  This is the title for a piano piece written by the Norwegian composer Christian Sinding.  So going on the Spring theme, I have here an English scene, a pub, the sun is still low in the sky, birds are flying back North, the daffodils are out.  Well you get the idea....

Latest Watercolour Demo Video - Can a Car Park make for an interesting painting??

Here's my latest watercolour video, up on my YouTube Channel and a choosing a very ordinary subject, in this case a car park, to see if it can made into an interesting painting.... 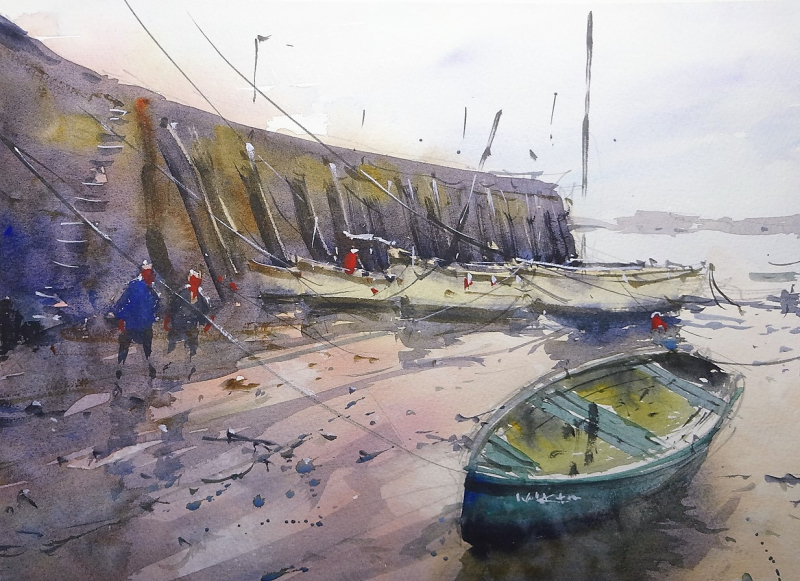 Minehead Harbour in North Somerset and a Winter's scene.  The harbour bed here is a mixture of sand and mud, so a bit tricky to walk over in places.  It's a change to paint a dull light scene as opposed to something in bright sun.  Good practice for getting the shapes and composition right to compensate for lack of contrast.  Still, you can introduce some darks and lights - so the darkest area here might be the bottom of the boat and the lightest area might be the sea in the distance. 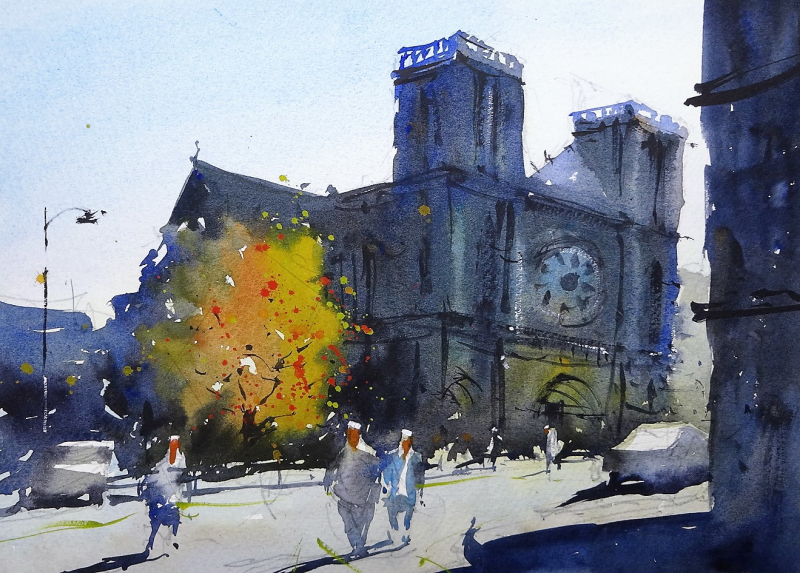 A thank you to Jean-Luc who sent me a reference photo for this painting of Bayonne Church in Autumn.  I suppose there are a few different approaches to painting a light coloured tree against a dark background - 1) Negative painting (dark background first then the tree), 2) Paint tree first, let dry/ish then do the background, or possibly 3) a load of thick body paint for the tree on a dry background.  I went for a variant of 1) and 3) !

Boats moored up on the beach - Tossa de Mar 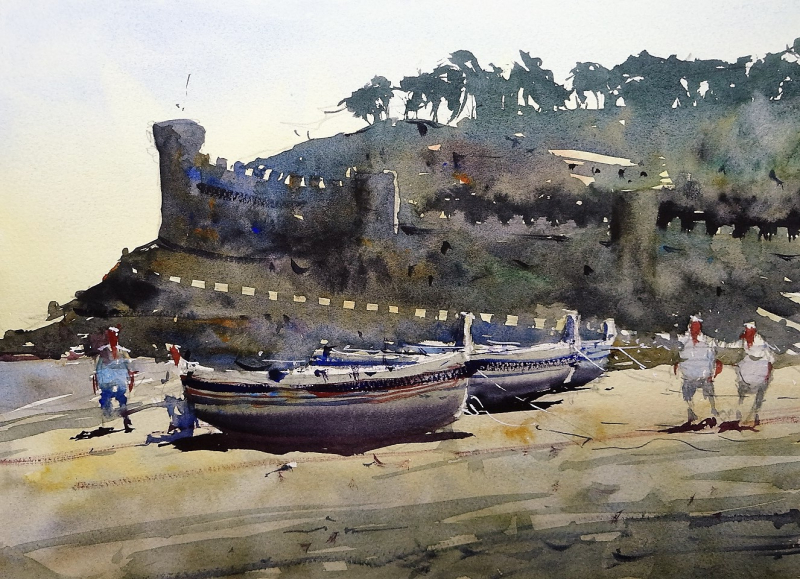 Based on a holiday photo of mine, I thought the repetitive pattern of the castle ramparts made for an interesting backdrop to some boats up on the beach.  The pine trees up on the top of the hill are just simple silhouettes, painted loosely with an old mop brush.  The two figures on the left were not originally planned, but during the later stages of the painting, some gaps in the background allowed to 'make' some figures.

Ilfracombe Harbour in some Winter light 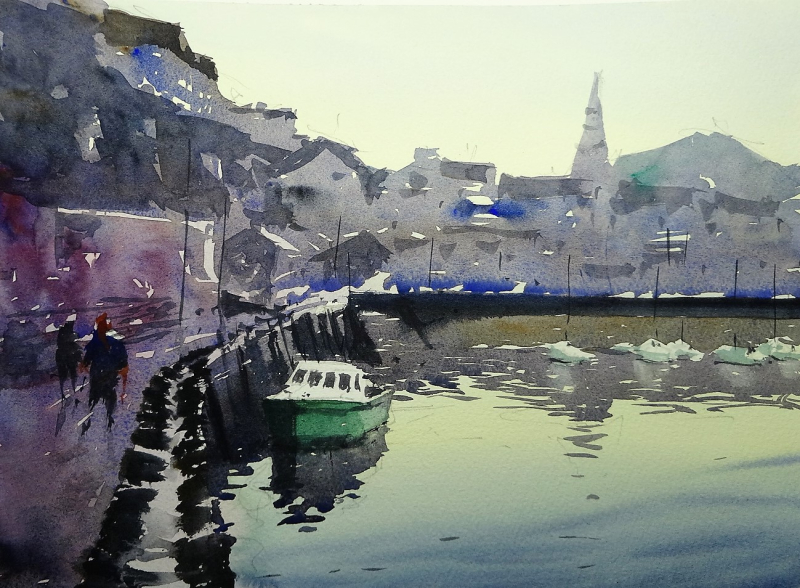 After a recent visit to this north Devon seaside resort in the UK, I though I would have a go at painting the sheltered harbour here with a bit of  a Winter glow.  So I have used very cool and weak colours and no strong shadows.   A little bit of a yellowy/green for the water and some solid reflections.  To get some contrast in, I have the light coloured boats showing up against a darker background.  The background boats are just rough shapes - what perhaps makes them appear as a boat is a reflection, a mast and a waterline. 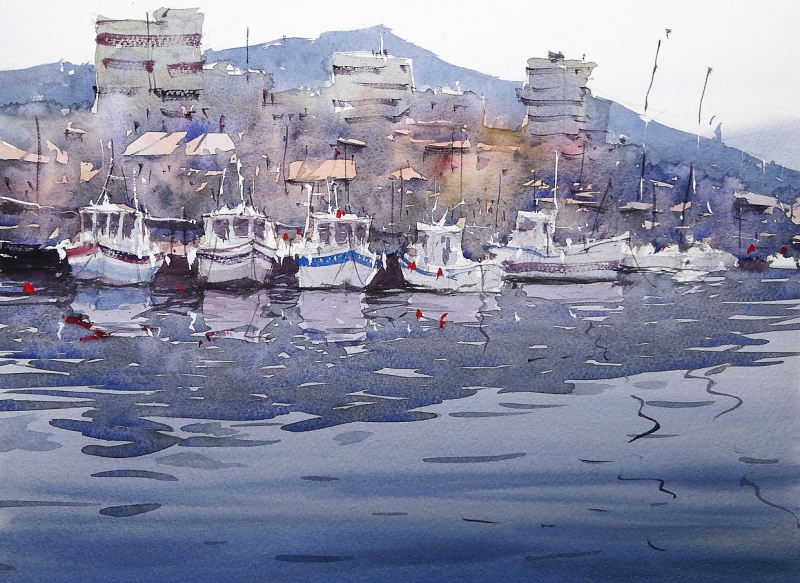 A practice for an up and coming watercolour demo to a local art society.  I have an hour or under to do this painting, so it needed a little trial before the live event.  It is really a made up scene, but based on some of me more 'Mediterranean' paintings - possible those I have done in Greece.  So, a fairly easy row of similar fishing craft with a town as a background and maybe a distant hill.  Also, there needs to be some masts in the picture - makes it more nautical and helps join some of the areas together. 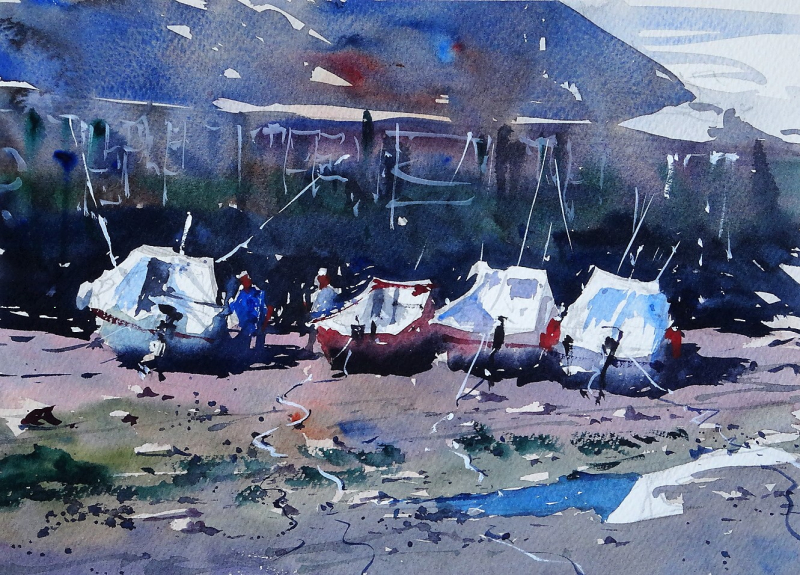 The result of one of my YouTube videos from late last year and here I post a better image.  Actually quite a simple composition with the dark background (with a lighter line running across representing a road above the harbour) and the lighter craft in contrast.  Using rough texture paper helps with the dry brush strokes of seaweed across the harbour floor.  A touch of white gouache is used for the rigging and harbour wall details.

Here's my latest watercolour demo video up on my YouTube Channel.  This time a London scene and using a limited 3-colour palette.