Archway near the Citadel, Alexandria 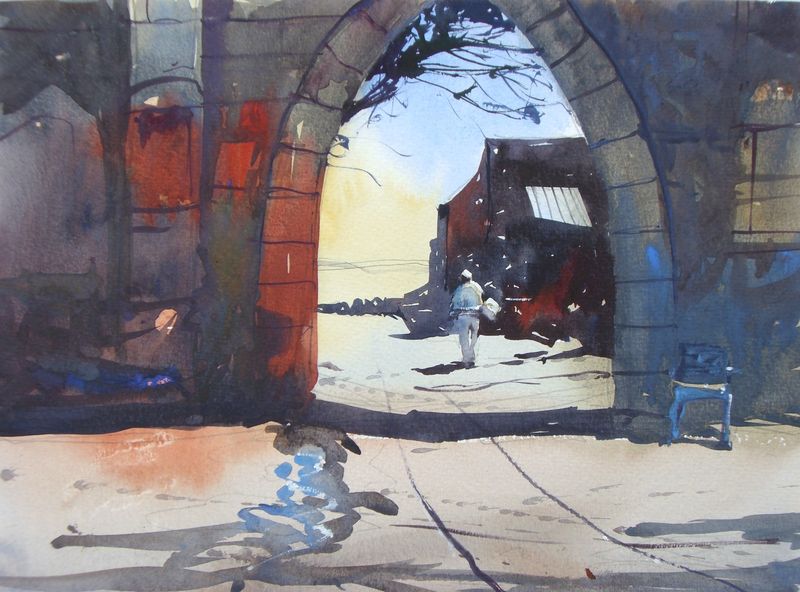 An archway very close to the old Citadel in Alexandria and a glimpse through to the bay beyond.  I am sure this archway had some great significance - there were two large plaques either side of the entrance with arabic script on them, and a guard sat on a blue plastic chair with his worry beads. 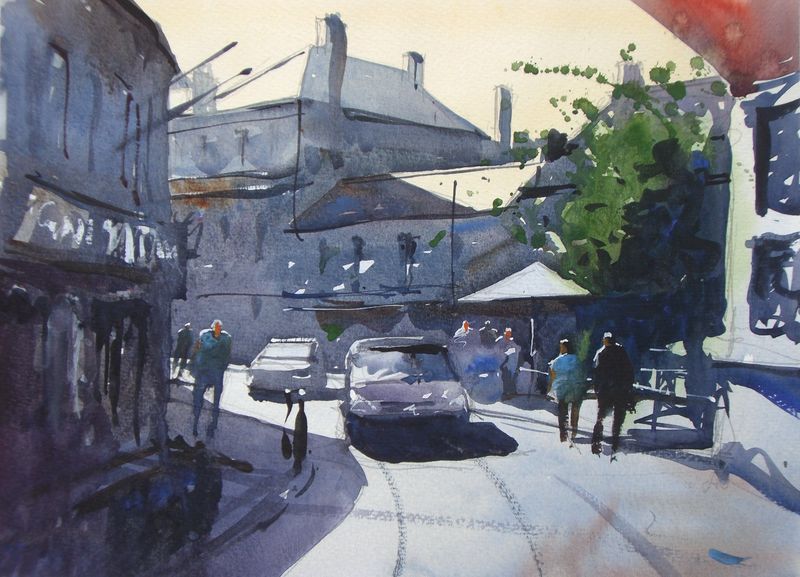 The bottom end of the town centre in Newquay, Cornwall, and by day it's a popular seaside resort, especially in the summer months, but especially busy on Friday and Saturday nights as this is the main bar and nightclub area.  But you would hardly notice that during the day. 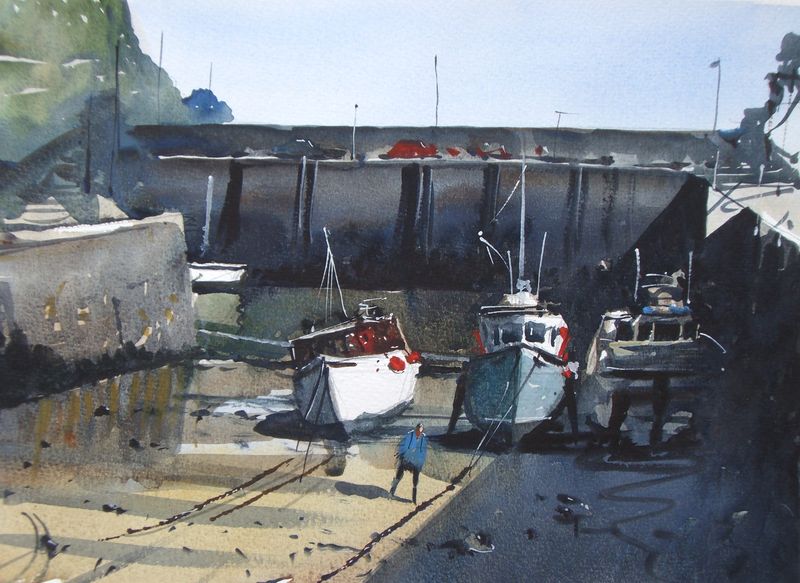 Tranquility at low tide in Newquay Harbour on the North Cornish coast.  I thought this made a nice composition with the three different boats together, and their connected chains leading you into the picture. Also for me what pulled it together was the shadow coming across the picture adding another dimension. 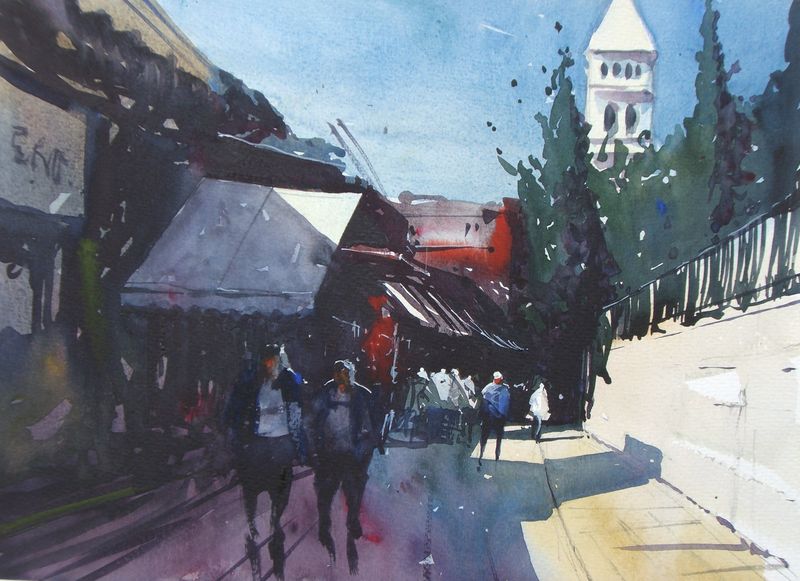 In the Christian Quarter of the Old City of Jerusalem, a stone's throw from the Church of the Holy Sepulcher, is the Lutheran Church of the Redeemer (on Muristan Road). Built by Kaiser Wilhelm in the late 1800s, he personally dedicated the church in 1898, when he and his wife, Augusta Victoria, became the first western rulers to visit Jerusalem.  You can climb 177 steps up the bell tower and see Mount Zion. Via Dolorosa ("Way of Grief" in Latin) is a road in the old city of Jerusalem, a path where Jesus was lead in agony, carrying the crucifixion cross. Via Dolorosa is located within the beautiful old city of Jerusalem and this is the view up to the Ecce Homo Arch (“Behold the man” in Latin). According to the New Testament, these were the words uttered by the Roman prosecutor when he presented Jesus to the people before being sentenced.

Final day on the Joseph Zbukvic / EPC Course and final exercise is a practice of Joseph's trademark deep landscape, looking into the far distance, with a misty / hazy feeling to it.  I left out his cows on mine, as being only a qtr sheet I thought I would over do it. 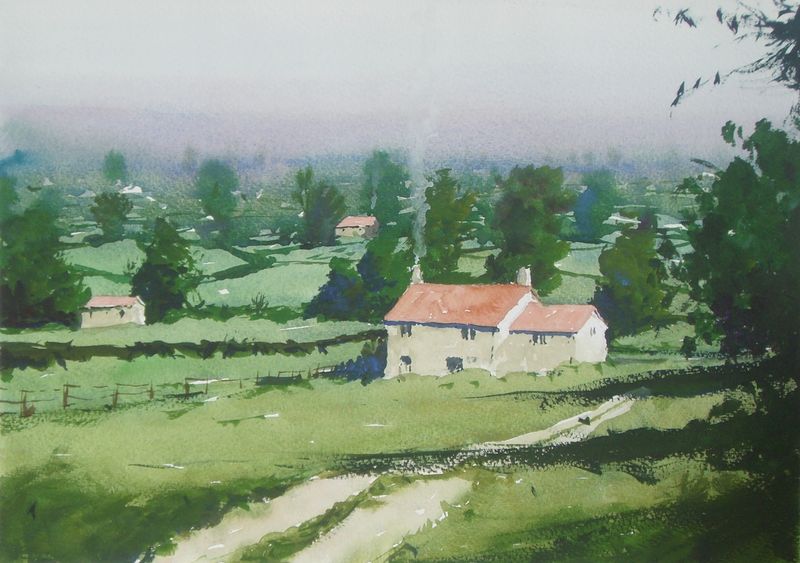 The last thing to go in was the chimney smoke, via a bit of dampening of the paper over the area of the smoke and then dropping in some white gouache.

Anyway in summary things learnt on this workshop:

Day 5 and the morning exercise was a typical French/Italian market scene in a small square.  It was I guess a practice in composition again, tonal values and light.  As per normal I did not listen 100% to teacher and had slightly modified the example we should have copied.  So mine was probably more Southern Italy in atmosphere rather than France: 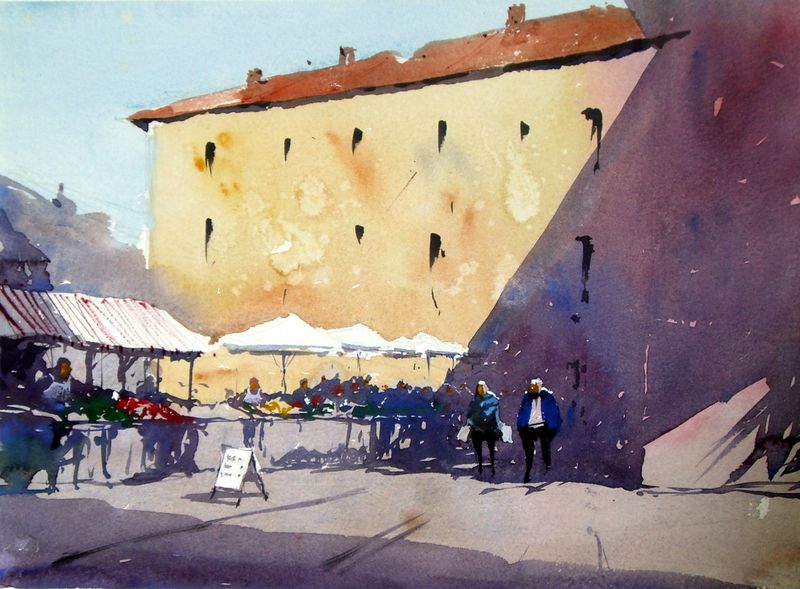 My next effort (again a rush job before lunch, so done in 30 minutes or so) was closer to Joseph's style with perhaps less strength in the colours, a bit more subtle and a looser feel to the shadows, background building and figures under the parasols. In the afternoon I did a quick sketch of the bay in front of the hotel, looking over to the far side of Cadeques. 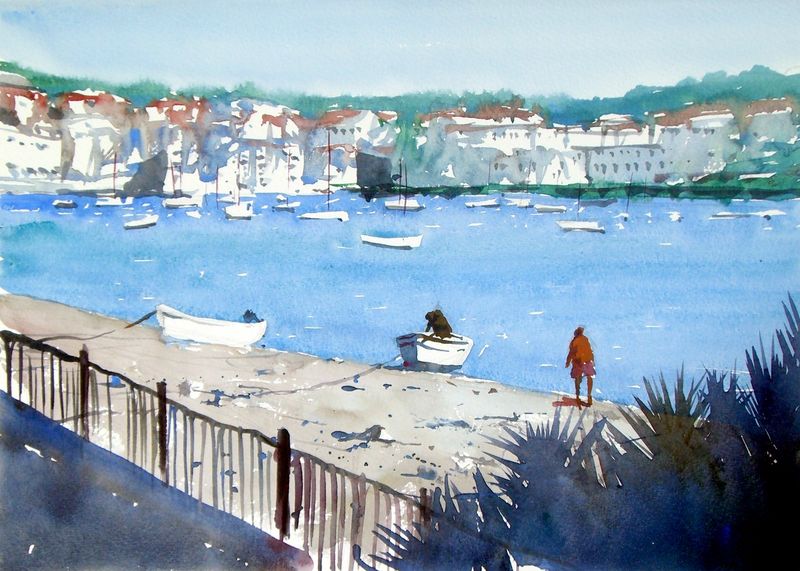 Workshop Day 4 and Morning exercise was an imaginary harbour scene with elements of many Mediterranean scenes.  First is Joseph's example (excuse the poor quality, as the photo was taken on my phone): 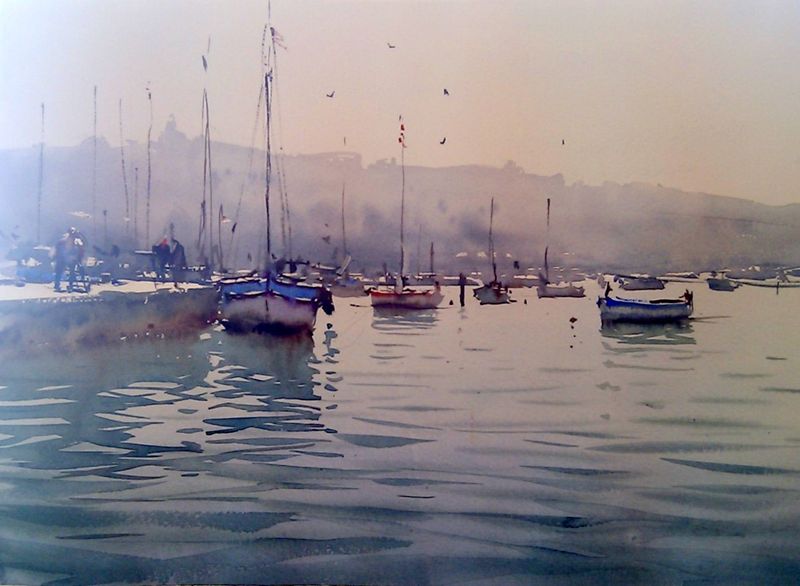 Again it was a light wash with darker thicker pigment dropped into the damp sea wash to give the soft waves.  A creamy wash was applied later for the harbour wall and boat reflections.

And here is my effort and again I went a bit too dark (oops). 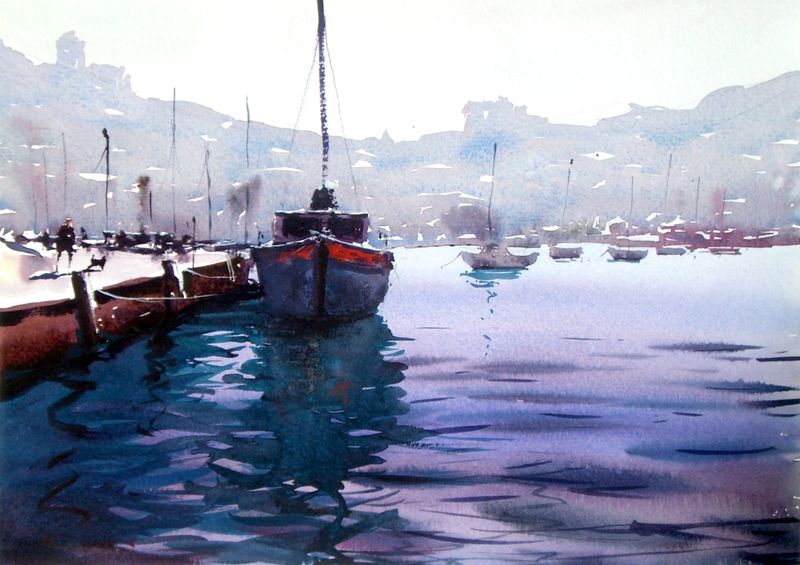 Afternoon, and out the group went again for some outdoor painting in the main central bay in Cadeques.  Joseph gave us first a superb rendition of the righthand side of the bay, with the afternoon shadows giving interest: 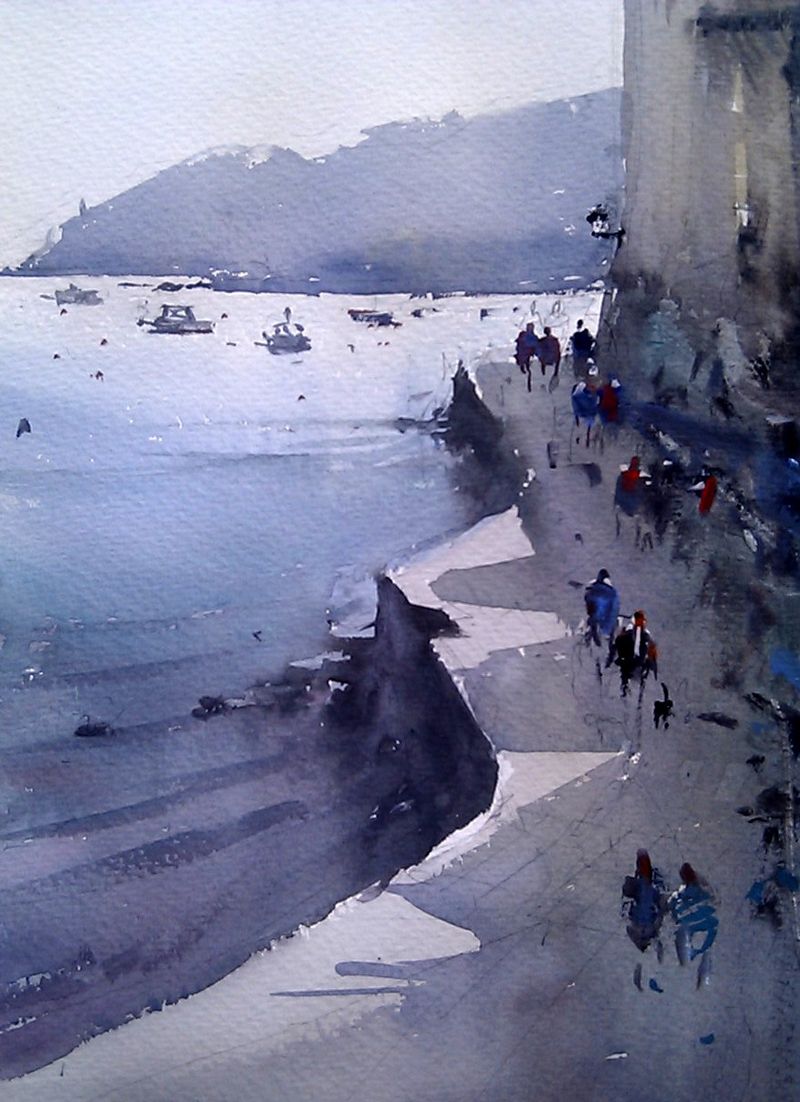 And we all duly followed with our interpretation. Here is my effort: 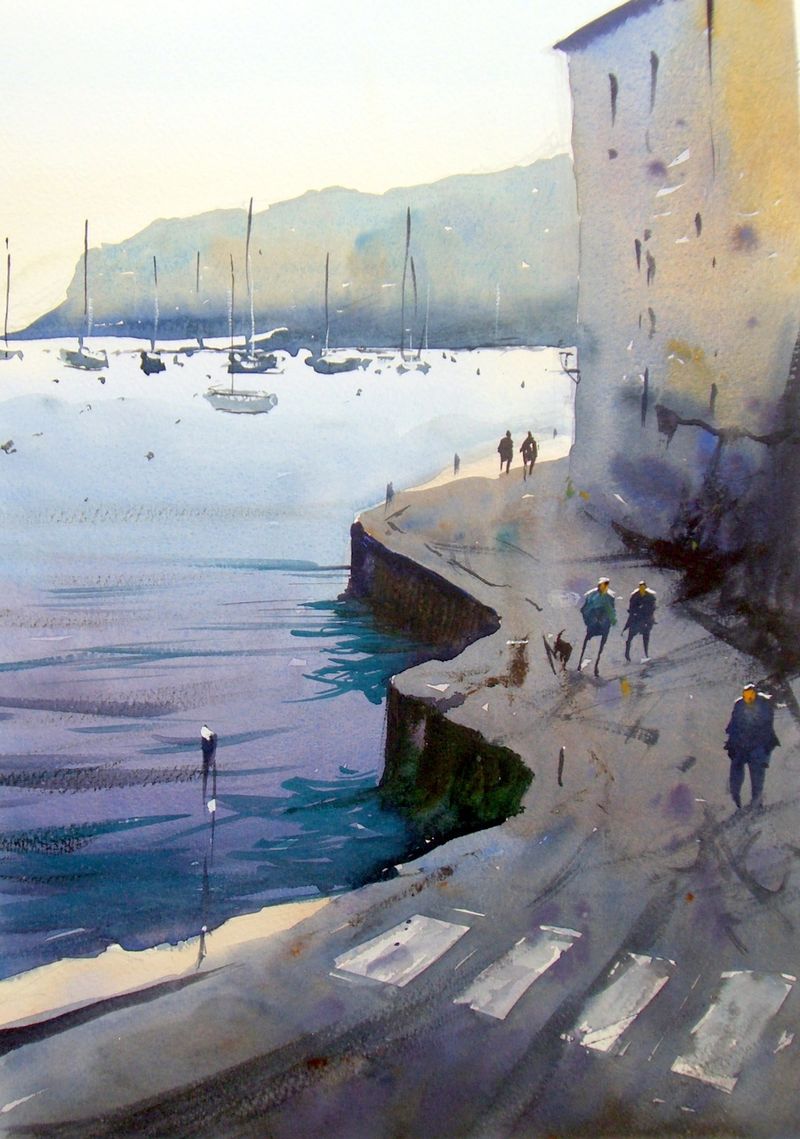 Day 3 and studio exercise was another Paris scene, on a rainy dark day.  For me this was particularly difficult because of timing the washes and the reflected highlights of windows and car headlamps (the yellow went in at quite an early stage I can remember).  I thought my attempt looked more like an illustration out of a Harry Potter scene. 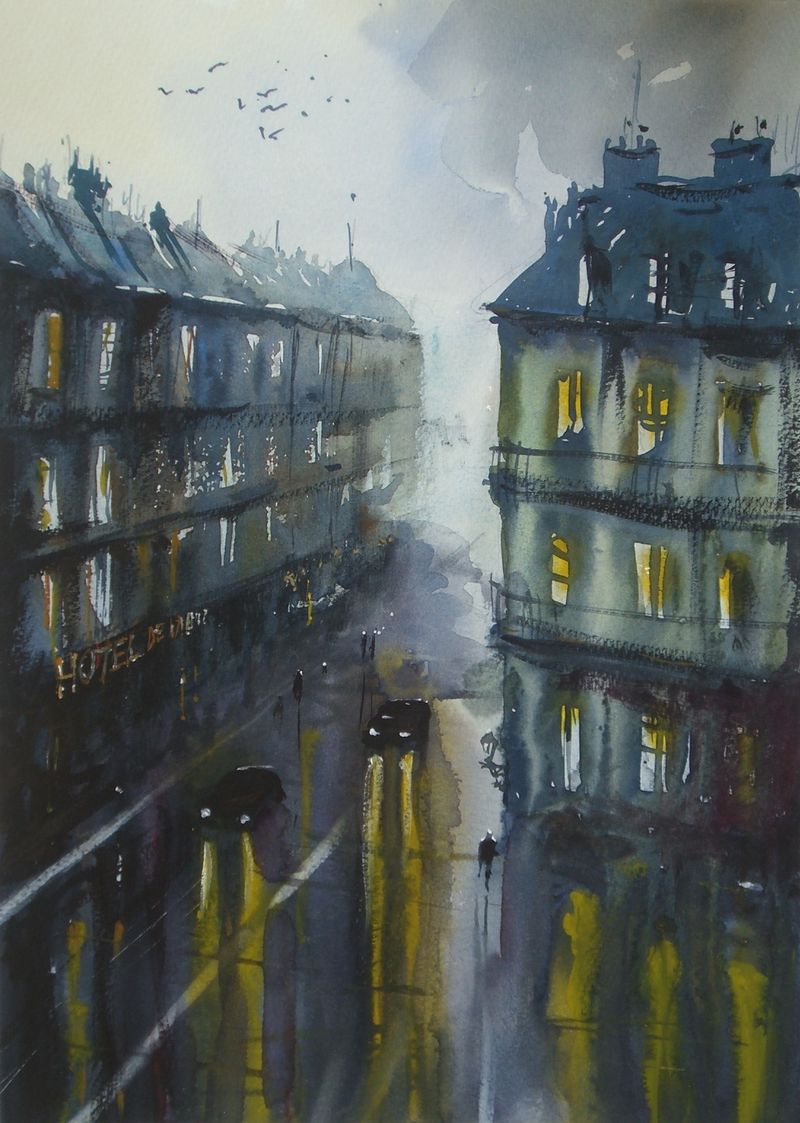 Anyway job done and on with the next one. In the afternoon the group ventured out to a bay further into Cadeques centre, which offered scenes to either side so I painted them both!  First one, maybe a more orthodox Cadeques scene, looking into the light: 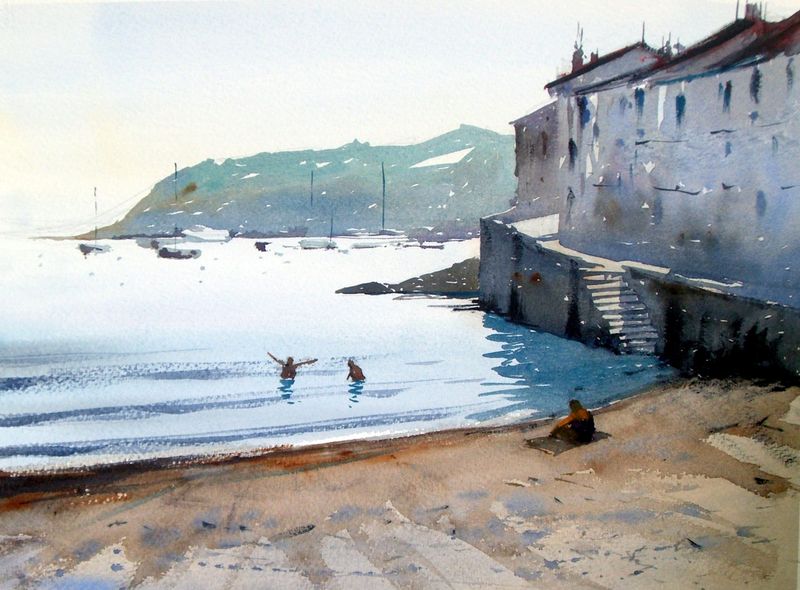 And my second painting I relocated a short distance to the other side of the bay and with a beer in hand (well I was sat in a nice cafe there) and a brush in the other (had to make sure I was dipping my brush in the correct glass), did this one. Not an easy one this because of lack of composition opportunities and no contrasts between light and shade because of the diminishing light levels. It did illustrate the very narrow road that hugs the side of the bay. 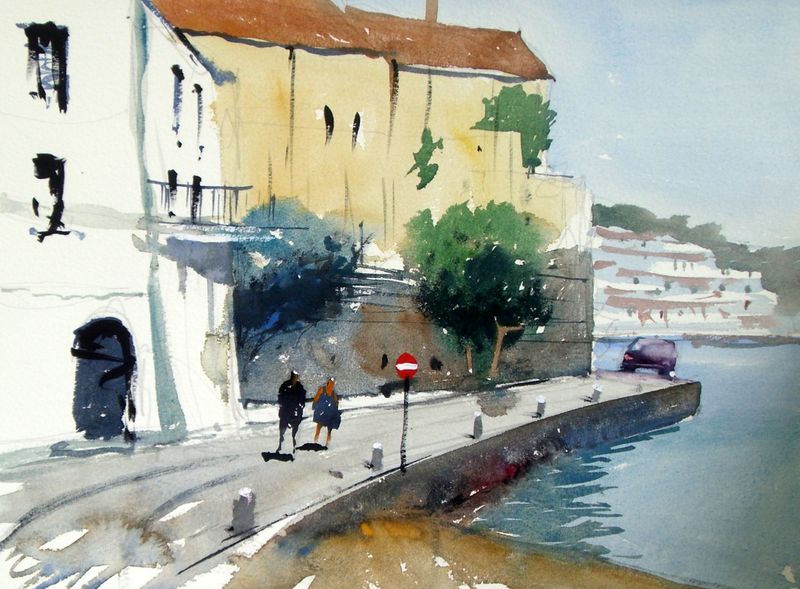 This was the first day I was using the better Saunders Waterford paper on my plein air paintings.  Until then I had used the much cheaper Bockingford.  Saunders takes longer to dry by comparison, is not so white, but the washes behave themselves!

Day 2 and exercise in the morning was a typical Paris scene, looking into the light.  This was an exercise is tone, light and composition, with I suppose the most difficult being the pedestrian crossing and perspective.

Here is my rendition: In the afternoon we moved outside for a spot of plein air painting.  And literally just outside the hotel in Cadeques (Llane Petit) is this great little bay with picture postcard boats high up on the shingle beach: 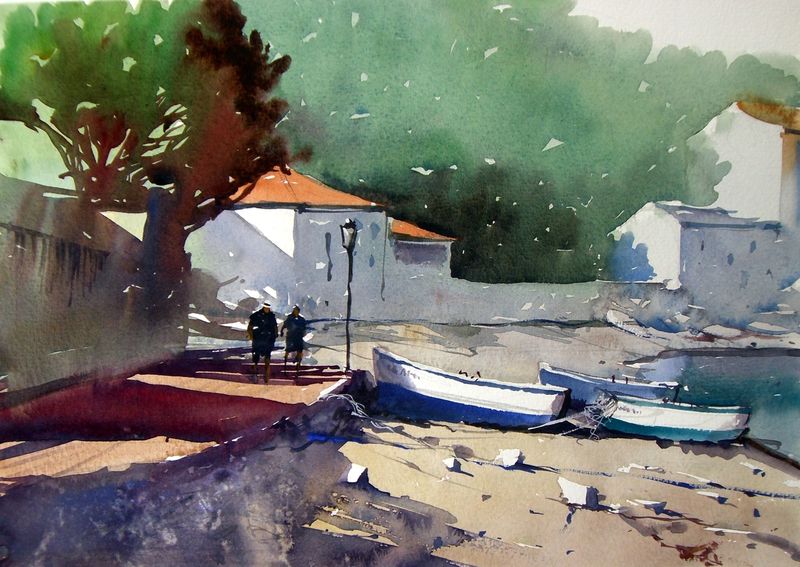 As always, Joseph spent a lot of time with the students and offering guidance and help along the way, as wel as a critique the end of the painting.  Joseph's comments on this one - foreground too small (or horizon not high enough), shadow on road too warm and too much detail in the foreground.